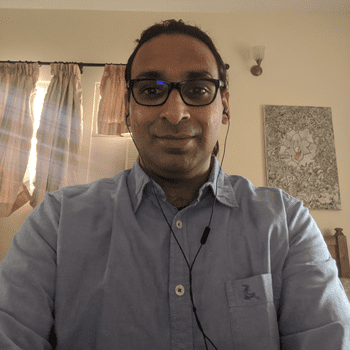 Do you have questions for Krishna Sundaresan?

Log in to ask Krishna Sundaresan questions publicly or anonymously.

This is the way

If you don't know that line, you probably haven't caught up with the awesome Star Wars-based series on Disney+Hotstar, called the Mandalorian. I just finished watching the Season 2 finale. It is probably the best “Star Wars” since the original. Maybe even better.

I read Joseph Campbell’s Hero With a Thousand Faces, before I watched my first Star Wars movies. So for me, Star Wars has always been about the myth and the internal personal struggle, especially around the father figure.

That's why I find the Mandalorian is just so close to (better than?) the original. I recently found out that the creator of the show, Favreau, also channeled Joseph Campbell. I am so glad I could understand this. The originals were about Luke and his father, so kind of the son's POV. I am older now, and am a father myself, and The Mandalorian just speaks to me as it is a father-son story, but from the father's POV. As I have been through my life, the Star Wars world has also followed me. The force has always been with me, and now I can see it clearly.

The rest of this article is about some of the best father-son stories I have encountered in my life.

Story 1: The Best Movie I have watched

I will start with probably the best movie I have ever seen. Yes! It is Bicycle Thieves. Spoiler Alert! If you have not watched it yet, please do. I watched this movie at a time my family and my dad specifically were going through a lot of problems, and identified more with little Bruno. I watched it again, just so I could get back the emotion to write this article. I now identify with the dad in the story, especially the scene where he goes through a moment of panic when there is a commotion about a young boy falling into the river. In fact the scene immediately after that with the restaurant meal, is somewhat the basis (known or unknown) for the entire Kaka Muttai movie. Kaka Muttai is also available on Hotstar, maybe in some secret realm, they are paying me for this article. Bicycle Thieves, taught me to be proud of my dad for all he did for us, and also to strive so that my son could one day, be proud of me.

One of the earliest father/son stories which made an impact on me was the tale of William Tell. The part where he has to shoot the apple on top of his son’s head. How cruel it was. How a father's competence, or lack thereof could kill his own son. Somehow this made me feel for all the fathers struggling with poverty, and trying to feed/educate their kids. Especially during lockdown this is so hard.

Sometime in 2019, during one my Friday evening get-togethers with my friends, I was in the zone, and went to town over Jayadev. I didn't realize why he triggered me so much. Why did I want so badly to show him a mirror to his face? I mean, I forced him to re-live his entire startup experience which I knew ended not so well. Was it purely compassion to help another struggling soul, or was it really my ego. Many days later I realized, it was not my ego, nor my compassion, it was my fear. Somewhere deep inside me, I feared that I would one day become like Jayadev, who in my view was a disaster of a dad. We all faced startup challenges and it was tough, but somewhere I felt he had just let go of his responsibilities as a dad. Then this year, he blew my mind away by taking his son (just father and son) on a road trip from Chennai to the Himalayas. I was then just laughing at myself. My son would be so lucky to have such a dad and such an experience. Jayadev’s journey helped me trust in myself and the universe. There are just so many things a dad can create for a son, that I realized how limited my view had been. For that I am truly grateful to him.

I was driving in my car, on my way to work from T Nagar. Traffic was bad, as usual, and I decided to take a short cut though Gandhi Nagar to avoid some major signals. Though a short-cut through a residential area, there was quite a bit of traffic, and I was driving not too fast, but not slow either. Suddenly a small figure darted across the road oblivious to the traffic. I slammed the brakes and my car and the ones behind me came to a screeching halt. I was about give that little figure a piece of my mind, when I looked and saw that it was a little boy who had just run across the road and standing next to what was likely his father. I must confess the first thing that struck me was that they were both wearing skull caps. My anger, turned into hatred almost instantly. Religious, political, and every other kind of hatred you can find, all boiled together and ready to serve. I happened to glance to the right of the sort of the forlorn looking father and son, and saw the sign board of the building they were heading towards. It said “Adyar Cancer Institute: Pediatric Ward”….

My anger/hatred/everything vanished and tears started flowing from my eyes. It didn't matter what religion/politics etc they were. It was just a father and son fighting against fate. What god would want children to have cancer?? Not mine, not yours, not anyone’s…Rabba Ho(God Is)…Rabba Ho(God Is)..