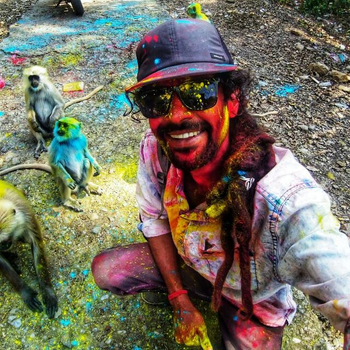 Do you have questions for Moses Ramachandran?

Log in to ask Moses Ramachandran questions publicly or anonymously.

Conversation between Bodhidharma and Emperor Wu narrated by OSHO

Bodhidharma reached China, and the Chinese emperor Wu came to receive him. Bodhidharma's fame had reached ahead of him. Emperor Wu had done great service to the philosophy of Gautam Buddha. Thousands of scholars were translating Buddhist scriptures from Pali into Chinese and the emperor was the patron of all that great work of translation. He had made thousands of temples and monasteries, and he was feeding thousands of monks. He had put his whole treasure at the service of Gautam Buddha, and naturally, the Buddhist monks who had reached before Bodhidharma had been telling him that he was earning great virtue, that he will be born as a god in heaven.

Emperor Wu asked his first question “I have made so many monasteries, I am feeding thousands of scholars, I have opened a whole university for the studies of Gautam Buddha, I have put my whole empire and its treasures in the service of Gautam Buddha. What is going to be my reward?”

Bodhidharma said, “Nothing, no reward. On the contrary, be ready to fall into the seventh hell.”

The emperor said, “But I have not done anything wrong — why the seventh hell? I have been doing everything that the Buddhist monks have been telling me.”

Bodhidharma said, “Unless you start hearing your own voice, nobody can help you, Buddhist or non-Buddhist. And you have not yet heard your inner voice. If you had heard it, you would not have asked such a stupid question.”

And the emperor said, “My mind is very uneasy, very disturbed. You are a great sage, and I have been waiting for you. Tell me what I should do to put my mind at peace.”

Bodhidharma said, “You don’t do anything. First, you bring your mind to me.”

The emperor could not follow he said, “What do you mean?”

Bodhidharma said, “Come in the morning at four o’clock when nobody is there. Come alone, and remember to bring your mind with you.”

The emperor couldn’t sleep the whole night. Many times he canceled the whole idea: “This man seems to be mad. What does he mean, ‘Come with your mind; don’t forget?'” The man was so enchanting, so charismatic that he couldn’t cancel the appointment. As if a magnet was pulling him, at four o’clock he jumped out of the bed and said, “Whatsoever happens, I must go. This man may have something; his eyes say that he has something. Looks a little crazy, but still I must go and see what can happen.”

So The emperor reached, and Bodhidharma was sitting with his big staff. He said, “So you have come? Where is your mind? Have you brought it or not?”

The emperor said, “You talk nonsense. When I am here my mind is here, and it is not something which I can forget somewhere. It is in me.”

So Bodhidharma said, “Okay. So the first thing is decided — that the mind is within you.”

He opened his eyes. He bowed down to Bodhidharma and said, “There is no mind to be found.” Bodhidharma said, “Then I have put it at peace. And whenever you feel that you are uneasy, just look within, where that uneasiness is.” The very look is anti-mind because the look is not thinking. And if you look intensely your whole energy becomes a look, and the same energy becomes movement and thinking.

Liked by Sidharth Gopalakr... and 2 others

On 29th November, 1935 Swami Paramahamsa Yogananda with four others arrived at Ramana Maharishi Ashram, Tiruvannamalai. Below is the conversation

The group had lunch in the ashram and met with Maharishi.

Mr. C. R. Wright, his secretary, asked: How shall I realize God?

M.: God is an unknown entity. Moreover, He is external. Whereas, the Self is always with you and it is you. Why do you leave out what is intimate and go in for what is external?

D.: What is this Self again?

M.: The Self is known to everyone but not clearly. You always exist. The Be-ing is the Self. ‘I am’ is the name of God. Of all the definitions of God, none is indeed so well put as the Biblical statement “I AM THAT I AM” in EXODUS (Chap. 3). There are other statements, such as Brahmaivaham, Aham Brahmasmi, and Soham. But none is so direct as the name JEHOVAH = I AM. The Absolute Being is what is - It is the Self. It is God. Knowing the Self, God is known. In fact, God is none other than the Self.

D.: Why are there good and evil?

M.: They are relative terms. There must be a subject to know the good and evil. That subject is the ego. Trace the source of the ego. It ends in the Self. The source of the ego is God. This definition of God is probably more concrete and better understood by you.

M.: Bliss is not something to be got. On the other hand, you are always Bliss. This desire is born of a sense of incompleteness. To whom is this sense of incompleteness? Enquire. In deep sleep you were blissful: Now you are not so. What has interposed between that Bliss and this non-bliss? It is the ego. Seek its source and find you are Bliss.

There is nothing new to get. You have, on the other hand, to get rid of your ignorance which makes you think that you are other than Bliss. For whom is this ignorance? It is to the ego. Trace the source of the ego. Then the ego is lost and Bliss remains over. It is eternal. You are That, here and now.… That is the master key for solving all doubts. The doubts arise in the mind. The mind is born of the ego. The ego rises from the Self. Search the source of the ego and the Self is revealed. That alone remains. The universe is only expanded Self. It is not different from the Self.

D.: What is the best way of living?

M.: It differs according as one is a jnani or ajnani. A jnani does not find anything different or separate from the Self. All are in the Self. It is wrong to imagine that there is the world, that there is a body in it, and that you dwell in the body. If the Truth is known, the universe and what is beyond it will be found to be only in the Self. The outlook differs according to the sight of the person. The sight is from the eye. The eye must be located somewhere. If you are seeing with gross eyes you find others gross. If with subtle eyes (i.e., the mind) others appear subtle. If the eye becomes the Self, the Self, being infinite, the eye is infinite. There is nothing else to see different from the Self.

He thanked Maharshi. He was told that the best way of thinking is to remain always as the Self.

Later Swami Yogananda Paramahamsa (SYP) asked: How is the spiritual uplift of the people to be affected? What are the instructions to be given to them?

SYP.: Why does God permit suffering in the world? Should he not with his omnipotence do away with it at one stroke and ordain the universal realization of God?

M.: Suffering is the way for the Realisation of God.

SYP.: Should He not ordain differently?

M.: They help you to overcome suffering.

SYP.: Why should there be suffering?

M.: Who suffers? What is suffering?

No answer! Finally, the Yogi rose up, prayed for Sri Bhagavan’s blessings for his own work, and expressed great regret for his hasty return. He looked very sincere and devoted and even emotional.

Liked by Sabin and 2 others

On this Ekadashi make sure to read this. Shri Ramana Maharishi answers questions from Mrs.Piggot relating to diet

Maud A. Piggott, born in England was the first European woman to visit Ramana Maharishi. During one of her visits, she asked questions relating to diet regulation. Conversation between Mrs. Piggot and Maharishi below.

P.: What diet is prescribed for a sadhak (one who is engaged in spiritual practices)?

P.: What is satvic food?

P.: Some people take fish in North India. May it be done?

No answer was made by the Maharshi.

P.: We Europeans are accustomed to a particular diet; change of diet affects health and weakens the mind. Is it not necessary to keep up physical health?

M.: Quite necessary. The weaker the body the stronger the mind grows.

P.: In the absence of our usual diet our health suffers and the mind loses strength.

M.: What do you mean by strength of mind?

M.: The quality of food influences the mind. The mind feeds on the food consumed.

P.: Really! How can the Europeans adjust themselves to satvic food only?

M.: (Pointing to Mr. Evans-Wentz) You have been taking our food. Do you feel uncomfortable on that account?

Mr. Evans-Wentz: No. Because I am accustomed to it.

P.: What about those not so accustomed?

M.: Habit is only an adjustment to the environment. It is the mind that matters. The fact is that the mind has been trained to think certain foods tasty and good. The food material is to be had both in vegetarian and non-vegetarian diets equally well. But the mind desires such food as it is accustomed to and considers tasty.

P.: Are there restrictions for the realized man in a similar manner?

M.: No. He is steady and not influenced by the food he takes.

P.: Is it not killing life to prepare meat diet?

M.: Ahimsa stands foremost in the code of discipline for the yogis.

P.: Even plants have life.

P.: May we gradually get ourselves accustomed to vegetarian food?

Liked by Sidharth Gopalakr... and 3 others